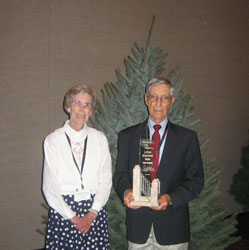 Sam Cartner was recognized for his years of service to the industry when he was presented with the Lifetime Achievement Award at the 2006 National Christmas Tree Association Biennial Convention in Portland, OR.

Raised on a farm in Davie County in North Carolina, Sam developed a true love for the land that has only grown through his years in the Christmas Tree industry. His interest in agriculture led him to a career as a county extension agent in Avery County, N.C., where he served for 21 years. During his tenure with the Extension Service, he helped the farmers of the area make their land profitable by selling Christmas Trees as a cash crop. He continually worked to develop better production practices and to share these with members of the industry.

In addition to being a crusader for the entire Real Tree industry, Sam has been a strong advocate for wider acceptance of the Fraser fir as a Christmas Tree species. He served as the first chairman of the Fraser Fir Promotional Committee, organized by the NCCTA. Because of Sam’s dedicated effort and others like him, Fraser fir has gone from an unrecognized tree contributing less than 1% of the Real Christmas Tree market in 1957 to more than 25% today. Sam was also an instrumental force in shaping the Christmas Tree business in North Carolina, establishing a multimillion dollar industry in the state and creating a viable source of income for hundreds of small farmers.

Sam and his wife, Margaret, have been involved in Christmas Tree production since the 1950s, and today, the Cartner Christmas Tree Farms consists of more than 300 hundred acres, offering wholesale, mail-order and Choose & Cut trees. Sam is an active member of local, regional and national industry organizations, including the Avery County Nurseryman’s Association, NCCTA and NCTA. He has served as president of the State Association of Agricultural Extension Agents and has served on numerous advisory boards, commissions and councils.

Over the years, Sam has often shunned the limelight, preferring to focus on collaborative efforts and work behind the scenes. However, his dedication and achievements have not been overlooked. In 1999, the Cartners were chosen as the “Avery County Farm Family of the Year.” In 2002, Sam was inducted into the Western North Carolina Agricultural Hall of Fame, and the Cartners were awarded the North Carolina Christmas Tree Association’s Outstanding Service Award in March 2006.